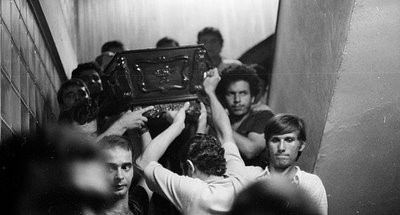 It was on 28 march, 1968 that police in Brazil killed student Edson Luis de Lima Souto. Four years earlier, the democratic government had been replaced with a military dictatorship as the result of a coup supported by the United States. Edson, was from a poor family and was part of a demonstration in which high prices were being protested. He was shot point blank in the chest.  Fearing that the police would hide Edson Luís’ body, students did not allow him to be taken to the Forensic Institute; instead, they carried him to the Legislative Assembly of Rio de Janeiro, where a funeral service was held. The above photo shows students struggling with the casket.  Protest placards soon appeared reading: “Do bullets kill hunger?”, “Old people in power, young people in coffin”, and “They killed a student… what if it was your son?”

On March 28, 2008, to honor the 40 years since Edson Luís’ death, a statue of him was inaugurated at the Ana Amélia Square in Rio de Janeiro.