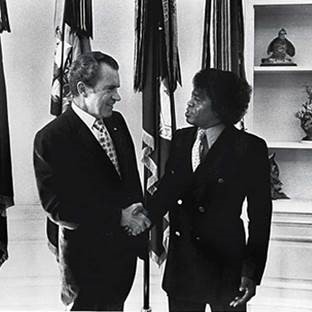 On 3 May in 1933, James Brown was born into extreme poverty in South Carolina. His family would soon move to Georgia but his conditions did not improve. Soon his mother abandoned the family and James spent much of his time on the streets.

He began singing in talent shows as a young child, first appearing at Augusta’s Lenox Theater in 1944. At 16, he was convicted of robbery and while incarcerated formed a gospel singing group with some of his fellow inmates. Upon his release, he starting playing in professional gigs and formed the group, ‘The Famous Flames’.  In 1959, he scored a number one hit on the R&B chart with ‘Try Me’. This would be the first of seventeen chart-topping R&B hits. He also holds the record for the most singles listed on the Billboard Hot 100 chart, which did not reach number one.

By 1967, Brown’s emerging sound had begun to be defined as funk music and Brown himself was known as ‘Soul Brother No. 1’. Brown was known to put on spectacular shows for his audiences and was very demanding of his band members. He would be termed, ‘the hardest working man in show business’.  One of the signatures of his performances was to be led away from the microphone, in apparent physical and emotional exhaustion, while singing the song, ‘Please Please Please’. A band member would seemingly comfort James, draping a cape around his shoulders and slowly walk him off stage, only to have James shrug the cape off and tear back to the microphone to once again beg the object of his musical affection to “Please Please Please don’t go!”

Brown contributed the song – “Say it Loud, I’m Black and I’m Proud” – in 1968 to the rising movement of Black consciousness. Much to the consternation of many Black activists, Brown was also an outspoken supporter of President Richard Nixon, show together in the above photo. His song “I Don’t Want Nobody to Give Me Nothing (Open Up the Door, I’ll Get It Myself)”, focused on themes of black empowerment and self-reliance.

He is ranked seventh on the music magazine Rolling Stone’s list of its 100 greatest artists of all time.