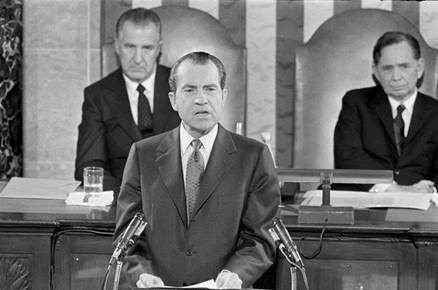 It was on 22 January, 1971, that President Nixon gave his State of the Union address to the 92nd Congress. He announced ‘Six Great Goals’ to reform government and transform society. His address read in part:

“When the Thirteen Colonies declared their independence almost two centuries ago, they opened the door to a new vision of liberty and of human fulfillment–not just for an elite but for all. To the generations that followed, America’s was the open door that beckoned millions from the old world to the new in search of a better life, a freer life, a fuller life, and in which, by their own decisions, they could shape their own destinies. For the black American, the Indian, the Mexican-American, and for those others in our land who have not had an equal chance, the Nation at last has begun to confront the need to press open the door of full and equal opportunity, and of human dignity.”