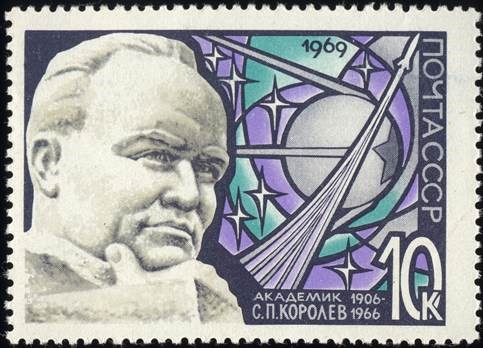 12 January marks the birth of Soviet engineer, Sergei Korolev, in 1907. Korolev was the driving force behind the Soviet space program from the 1950’s until his death in 1966. Fearing that he might be liquidated by Western intelligence, the Soviet authorities did not publicize his name, referring to him, even internally, as ‘Chief Designer’. Even some of the cosmonauts who worked with him were not aware of his true name. The Soviet public was not aware of his accomplishments until his obituary was published and his ashes were interred with honors in the Kremlin Wall Necropolis. The above image of Korolev is from a 1969 Soviet postage stamp.

A Member of Soviet Academy of Sciences, he oversaw the early successes of the Sputnik and Vostok projects including the first human Earth orbit mission by Yuri Gagarin in 1961. Although known for a tremendous capacity for hard work and long hours, as well as his willingness to train underlings, one colleague also described him as cynical and pessimistic, with a gloomy outlook on life and his own career, often saying, “We will all vanish without a trace”.

His character is dramatized prominently in the 2013 Russian language film, ‘GAGARIN, FIRST IN SPACE’, a trailer for which appears below.