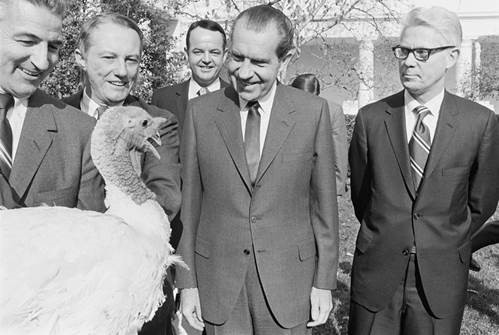 On October 3, 1863, President Abraham Lincoln issued a proclamation placing the celebration of Thanksgiving on the final Thursday of November. Lincoln was persuaded in part by the efforts of editorial writer Sarah Josepha Hale, who had written to four previous Presidents urging a national holiday of Thanksgiving, which up until that time was mostly celebrated only in the New England States. In 1939, President Franklin Roosevelt moved it to the 4th Thursday in November. Many Republicans opposed the change, and referred to the new date as “Franksgiving”.

This photo pictures President Richard Nixon admiring a Thanksgiving Turkey. To the right of the President is Congressman John B. Anderson of Rockford, Illinois, who would go on to run for President as an Independent in 1980, forming a ticket with former Wisconsin Governor, Patrick J. Lucey.