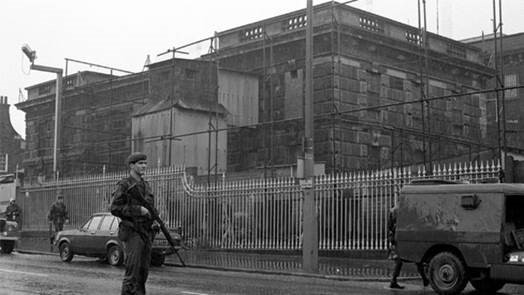 Crumlin Road Gaol, was a notorious penal facility in Belfast, Northern Ireland. It was alternatively known as HMP Belfast, or colloquially, ‘The Crum’. The facility frequently housed Irish Nationalist prisoners and just as frequently was the scene of dramatic breakouts and escape attempts. Over the years, it housed such prominent Irish Nationalists such as Eamon De Valera, Martin McGuinness, and Bobby Sands. The 19-year-old Volunteer Thomas Williams, of the Irish Republican Army’s ‘C Company’ was executed there in 1942.  In 1991, when Loyalist prisoners were being housed in one wing, the prison itself became the target of a Provisional IRA bomb, which killed two inmates.

The best-known breakout was on 17 November 1971, when nine Irish prisoners scaled the walls using rope ladders. Almost immediately they were dubbed the ‘Crumlin Kangaroos’ and became the affectionate object of a hit folk song. Less than a month later, three more would escape.

The Crum was closed on 31 March 1996. It is now a tourist attraction with conference meeting space and a café. Queen Elizabeth II toured it in 2014.