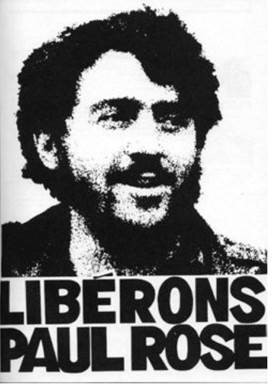 16 October marks the birthday of Paul Rose in 1943. Rose was a leader of the Chenier cell of the Front du libération du Québec. Known as the FLQ, this militant part of the Quebec sovereignty movement conducted over 160 acts of armed struggle from 1963 through 1970. The FLQ escalated activity to such a point in October 1970 that it became known in Canada as ‘The October Crisis’. Actions included the bombing of the Montreal Stock Exchange, the kidnap of British Trade Minister James Cross and the kidnap of Labor Minister Pierre Laporte who was snatched from the front lawn of his suburban home as he played touch football with his nephew on Oct. 10, 1970.

Laporte was found strangled in the trunk of a car a week later, a day after the invocation of the War Measures Act that sent Canadian troops into Quebec to back up police who were carrying out mass arrests where houses could be searched without warrants, citizens could be detained without bail or charges for 90 days, and being a member of the FLQ carried a 5 year prison term.

Prior to the ‘October Crisis’, Rose was also was one of the organizers of the McGill Français demonstration in 1969, which called for the university to be transformed into a French-language institution. That march erupted into clashes with police.

Rose’s scruffy appearance became well known to Canadians as his photo was plastered everywhere as part of a massive manhunt that would ultimately lead to his capture. Another image of Rose became iconic when he was photographed being taken to his arraignment. Rose, with one hand cuffed to a police officer, shot up his free in a clenched-fist salute, with camera shutters clicking before it was yanked down.

When he got to court, Rose yelled, “Vive le FLQ” as his trial date was set. After his conviction, Rose continued his activism from inside the prison walls, speaking out for convict rights and organizing strikes to get better education for detainees. A Quebec government commission determined in 1980 that Rose was not present when Laporte was killed. He was not paroled until two years later.

After his release, Rose stated that he had no regrets and remained an advocate of Quebec sovereignty. He also became involved in the Labor movement and advocated for convict rights. He was a prominent speaker at marches in favor of Quebec students fighting tuition increases.

Rose died of a stroke in 2013. Gérald Larose, the former president of the Confederation of National Trade Unions said he thought that Rose had paid his debt to society and that, “He was a man of conviction, he was an idealist”.