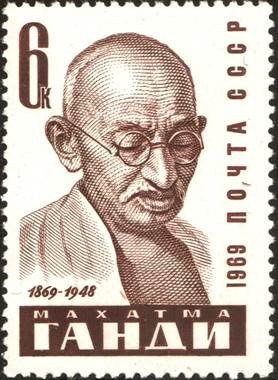 It was on this day, 2 October that Mohandas K. Gandhi was born in India in 1869. (The above image is of a Soviet postage stamp portraying Gandhi).

Gandhi, sometimes known as ‘The Mahatma’ or ‘great soul’, was born and raised in a Hindu merchant caste family and studied law in London. He would go on to be recognized as the preeminent spokesperson and activist for Indian Independence from Great Britain.

British authorities arrested Gandhi in March 1922 and tried him for sedition. He was sentenced to six years in prison but was released in 1924. By 1930, he captured the world’s attention with a 230 mile march in protest of a British government tax on salt which aroused the nation’s poorest citizens. Gandhi participated in successful negotiations with London to create Indian Independence in 1947, this included the partition of India, allowing also for an independent Pakistan.

After his assassination in 1948, nearly 1 million people followed the procession as Gandhi’s body was carried through the streets and cremated on the banks of the holy Jumna River.

His legacy has been significant. Time magazine named Gandhi the ‘Man of the Year’ in 1930. Gandhi was also the runner-up to Albert Einstein as ‘Person of the Century’ at the end of 1999. Statues of Gandhi can be found in Spain, Brazil, Russia, the US and the UK among other places.

In 2007, the United Nations General Assembly declared Gandhi’s birthday 2 October as “the International Day of Nonviolence.”

President Barack Obama in a 2010 address to the Parliament of India said that:

“I am mindful that I might not be standing before you today, as President of the United States, had it not been for Gandhi and the message he shared with America and the world.”

The film clip below is from the 1982 film, ‘GANDHI’ in which Ben Kingsley plays the title role. Here, Gandhi is a young lawyer, living in South Africa, at the time part of the British Empire. He rallies his fellow immigrant Indians who are experiencing discrimination from laws directed at them and explains his philosophy of non-violent resistance.