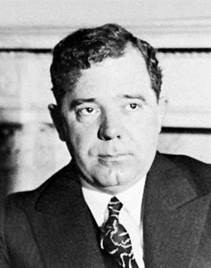 30 August, marks the day in 1893, that Louisiana politician Huey Long was born. Long would serve as Governor of the State from 1928 to 1932 and as US Senator from 1932 until his assassination in 1935. Long had openly talked about seeking the Presidency in 1936.

Long was raised in Louisiana’s improvised Winn Parish. He took the State Bar Exam after studying Law for one year at Tulane University.  He spent 10 years practicing law, often representing clients against large businesses and would state that he “never took a case against a poor man.”

In 1928, Long was elected Governor using the slogan, “Every Man a King, but no man wears a Crown” and vowed to redistribute the wealth as he openly attacked corporate interests such as Standard Oil, which had vast holdings in the State.

Upon taking office, Long found a State suffering from dire neglect, with the highest illiteracy rate in the nation, fewer than 300 miles of paved roads, and a hefty poll tax in place.

Long embarked on a massive building program undertaken at an unprecedented pace. His administration built roads, bridges, hospitals and a new State Capitol Building. His repeal of the poll tax increased voter registration by 76%. He was also a tireless booster of public higher education, greatly expanding the funding for and enrollment at LSU.  Long was relentless in his drive to pass his legislation and would arrive unannounced at Committee hearings and on the floor of the legislature to personally persuade lawmakers. He also built a massive army of political workers and State government appointees, earning the moniker ‘The Kingfish’, while at the same time suffering the wrath of both local and nationwide media outlets.

He would be shot dead in September of 1935, in the corridor of the State Capitol building by the relative of an anti-Long politician who sought revenge. An estimated 200,000 people arrived in Baton Rouge for his funeral.

His legacy had a powerful impact on Louisiana politics, up until 1960, most electoral contests were between candidates identified with the ‘pro’ and ‘anti’ Long factions. After his death, 12 of his relatives, including his son and siblings, would serve in elected office.