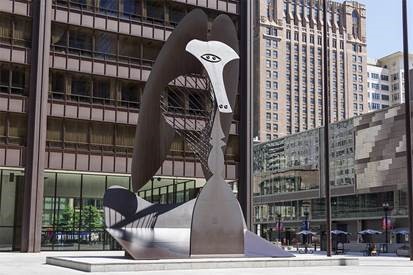 It was on 15 August, 1967, that Mayor Richard J. Daley dedicated the installation known simply as the ‘Chicago Picasso’, an unnamed gift of sculpture from the artist to the city. Now one of the city’s most recognizable landmarks it was met with mixed reviews upon it’s dedication.  Mayor Daley said, “I am confident it will have an abiding place in the city’s heart.”

Legendary Chicago journalist Studs Terkel was present at the unveiling and asked others what they thought of it. An art student described it as “very feminine”, a priest said it was “symbolic of the confusion of the present times”, and a public works employee said, “If it’s OK with Mayor Daley, it’s OK with me”.