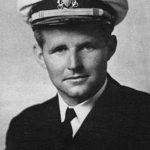 It was on this date, 12 August, in 1944 that Joseph P. Kennedy, Jr., son of Ambassador Joseph P. Kennedy and eldest brother of future Presidential candidates, John, Robert, and Teddy Kennedy, would be killed on a combat mission during the Second World War.

Kennedy had graduated from Harvard in 1938, where he served on the student council. Kennedy embraced the political ambitions his father had for him and attended the 1940 Democratic National Convention as a Delegate.

Kennedy left his final year of Law School in order to enter the United States Navy, where he was trained in aviation.

Kennedy volunteered for a combat assignment known as an ‘Operation Aphrodite’, in which a bomber (in Kennedy’s case a B-24) was packed with explosives about twice it’s normal payload. Since the bombs couldn’t be dropped in their conventional manner, the plan was to have the pilots get the aircraft off the ground and within range of the target, at which point the pilots would parachute from the aircraft and it would then be radio controlled to it’s destination and crashed into the target. 14 such missions were attempted during the course of the war, 8 took place after Kennedy’s death, none of the missions were successful.

Kennedy was awarded the Navy Cross, Distinguished Flying Cross, Purple Heart Medal, and the Air Medal for his service in combat.