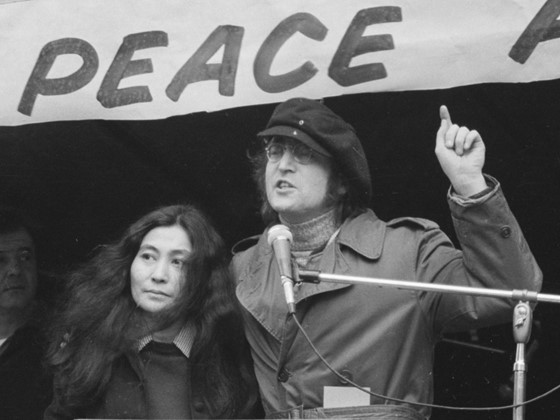 It was on 8 December, in 1980, the singer, songwriter and activist, John Lennon, was shot and killed in New York City. Lennon is pictured in this photograph with his wife, Yoko Ono.

Lennon was born in 1940, to an Irish father and an English mother, in Liverpool, England. His father was a merchant Seaman and away at the time of his birth. At 18, he wrote his first song, which became a top ten hit for the band, ‘The Fourmost’. In 1960, Lennon was able to organize his garage band mates, into ‘The Beatles’ and booked a 48 night gig in Hamburg, Germany. Two years later, drummer Pete Best would be replaced by Ringo Starr, forming the group most people are familiar with that included George Harrison and Paul McCartney.

Having achieved great success in the UK by 1963, The Beatles would make an historic appearance on US television in 1964, kicking off a wave of ‘Beatlemania’. Lennon left the group in 1969 and they each took on solo careers. Lennon moved to Manhattan in 1971 and became embroiled in a lengthy battle with US immigration authorities that would not be settled until 1975 when a court of appeals stated “… the courts will not condone selective deportation based upon secret political grounds.” He attended the Inaugural Ball of Jimmy Carter in 1977. Lennon’s political activism included opposition to the US war in Vietnam, support for Women’s Rights movements, the Black Panthers, and sympathy expressed for the Republican cause in Northern Ireland.

Three weeks after the release of his final album, Lennon was shot 4 times by a lone gunman who confronted him in the vestibule of his apartment building. He died that same night. His wife, issued a statement the next day, saying “There is no funeral for John”, ending it with the words, “John loved and prayed for the human race. Please do the same for him.” Ono scattered his ashes in New York’s Central Park, where the Strawberry Fields memorial was later created.

In his career, he was responsible for 25 number-one singles on the US Hot 100 chart as a writer, co-writer, or performer. Rolling Stone magazine ranked him the fifth-greatest singer of all time. In 1987, he was posthumously inducted into the Songwriters Hall of Fame. Lennon was twice inducted into the Rock and Roll Hall of Fame—first in 1988 as a member of the Beatles and again in 1994 as a solo artist.

In 2016, the film, ‘The Lennon Report’ was released that dramatizes the events of that evening. A trailer for the film appears below….