Celebrating Mexican Culture and Heritage at the Memorial Union

Dr. Larry Nesper provided the audience at Varsity Hall in Union South with an overview of the tribes native to Wisconsin in a presentation sponsored by the Campus Workers Collective. This event, which University Staff employees took part in without loss of pay, was in recognition of the culture and heritage of the Native Peoples of North America. Vicki Werla, Alternate of Congressional District 152 acted as emcee of the event. Central Committee Chair Terry Fritter also made remarks regarding the recent successes of shared governance and Secretary of the University Staff, John Lease, offered his greetings to those assembled.

A committee of University Staff shared governance reviewed over 140 nominations to select the final 8 winners. Winners were surrounded by friends, family and co-workers as they accepted a plaque of recognition and a letter of thanks provided by Chancellor Blank. 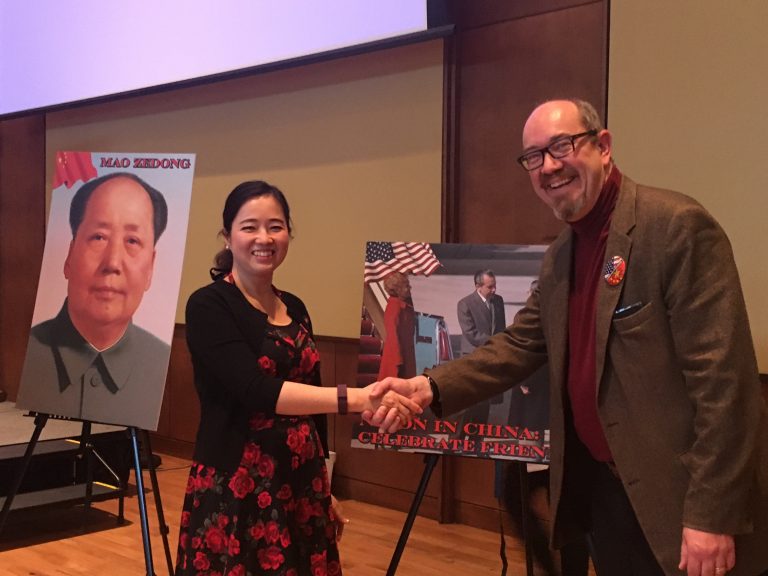 It was the biggest Shared Governance event this year, as more than 300 people packed Varsity Hall to commemorate the opening of relations between the USA and China.

Jing ‘Connie’ Li of the Madison Area Chinese Community Organization greeted the crowd and related how, as she was growing up, she heard her parents and their friends recall fondly the visit of President Nixon to China.

Dr. Joseph Dennis, Associate Professor, provided a wonderful power point that led the audience through the special relationship between the UW-Madison and China, how it was established, grew, was interrupted, and flourishes again today. UW employee Xiujuan Jane Zhang held the audience spellbound as she sang the Chinese song “The Sounds of Snowfall”.

The Beefeater Room at Memorial Union was packed to overflowing for an event to honor the life and legacy of Eugene V. Debs on November 9, 2018.

Those who attended this Campus Workers Collective event had the opportunity to hear from two distinguished speakers, Dr. Paul Buhle and Dr. Frank Emspak. Dr. Buhle is a renowned author, editor and historian and Dr. Emspak is Professor Emeritus of the School for Workers of UW-Extension. Together, they discussed the rise of the man and the message, and traced it to the conflicts and conditions of society today.

Those who attended enjoyed hot food prepared by University Staff and two lucky persons won a drawing in which they were awarded copies of the Debs memoir ‘Walls and Bars’. 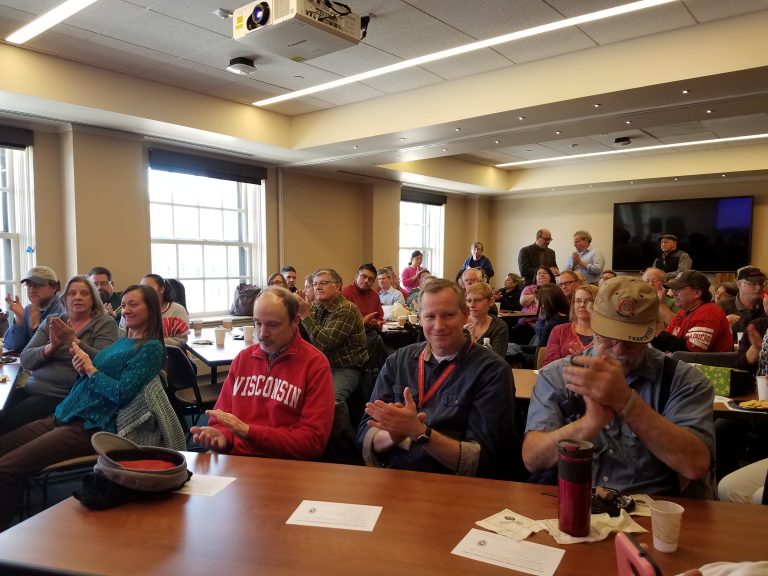 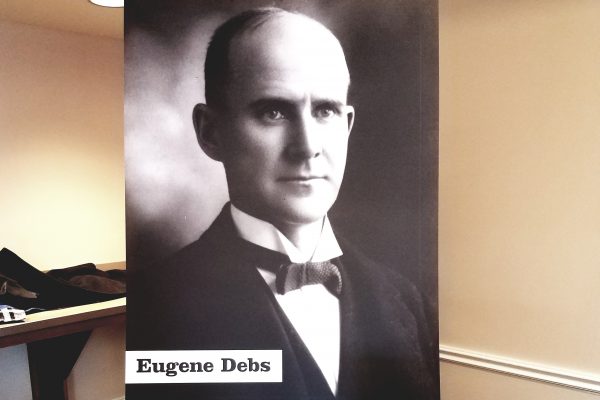 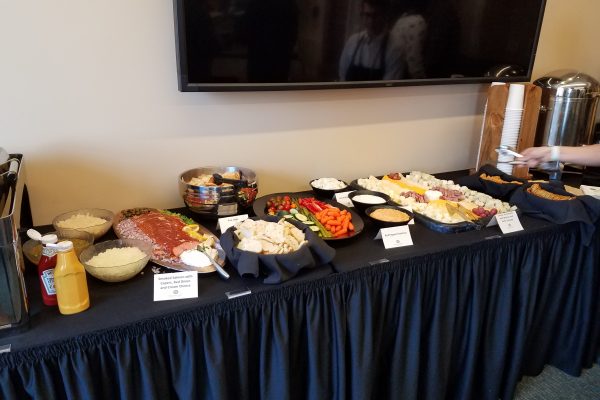 Great food and hot cocoa to go along 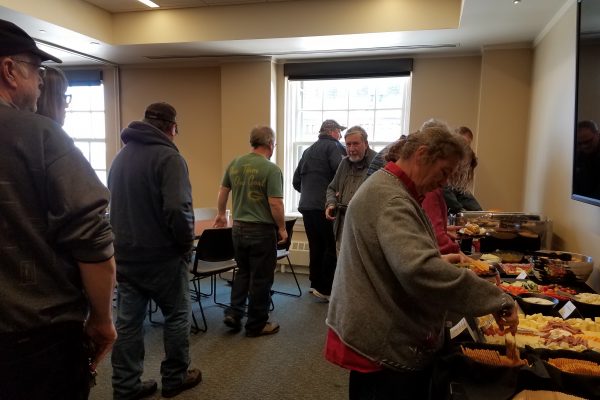 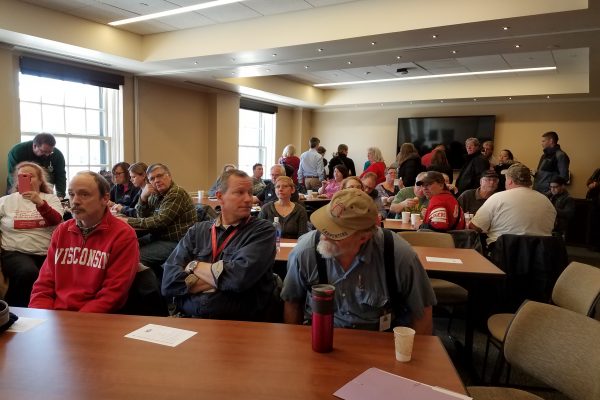 Full house at the Beefeater Room at the Memorial Union 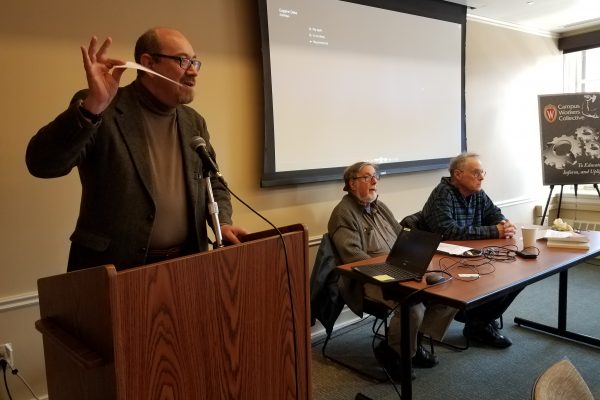 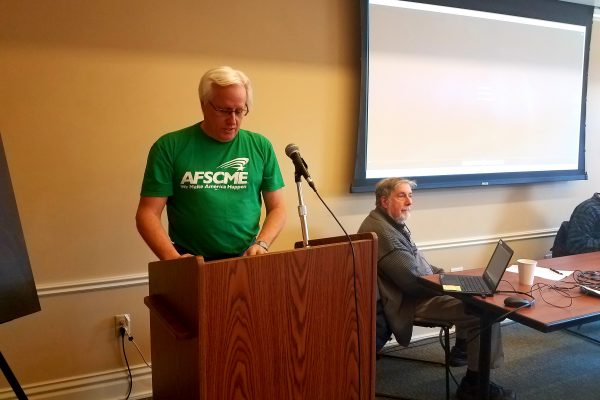 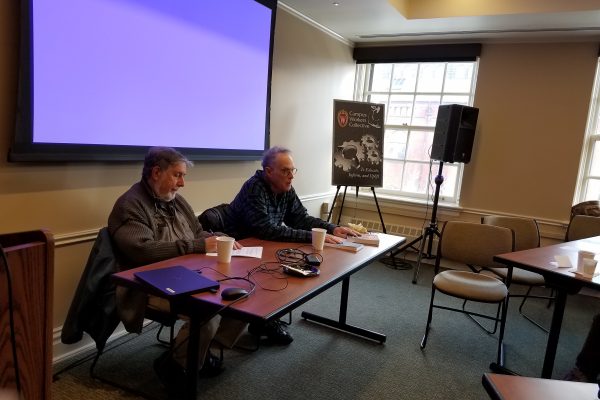 Dr. Paul Buhle and Dr. Frank Emspak talking about the life and legacy of Eugene Debs 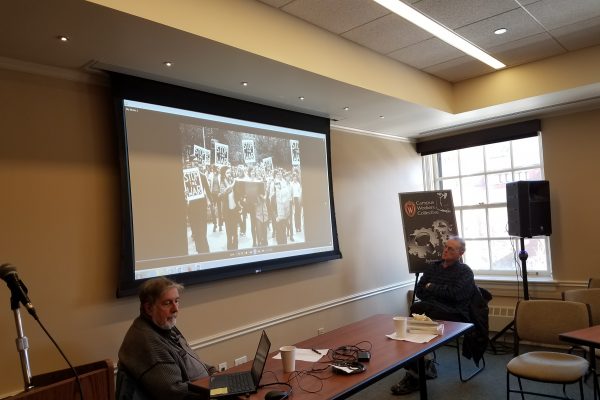 An enthusiastic crowd filled the Sonata Room at Gordon Commons to celebrate German culture and heritage.

There were hot German hamburgers, rousing German music, and even an attendee who celebrated the occasion by wearing a traditional costume of lederhosen.

Those who joined the event, learned more about Germany and the impact of German culture on America in general and on Wisconsin in particular, through the remarks of Dr. Sabine Gross of the campus German Department. In addition, Stefanie Freyberger of the Office of Strategic Consulting, added some authenticity to the event by reciting two poems of Hermann Hesse, in her native German language.

The Office of the Secretary of the University Staff organizes four cultural celebrations a year, two scheduled during the daytime working hours and two at night, and Oktoberfest has proved to be one of the most popular. 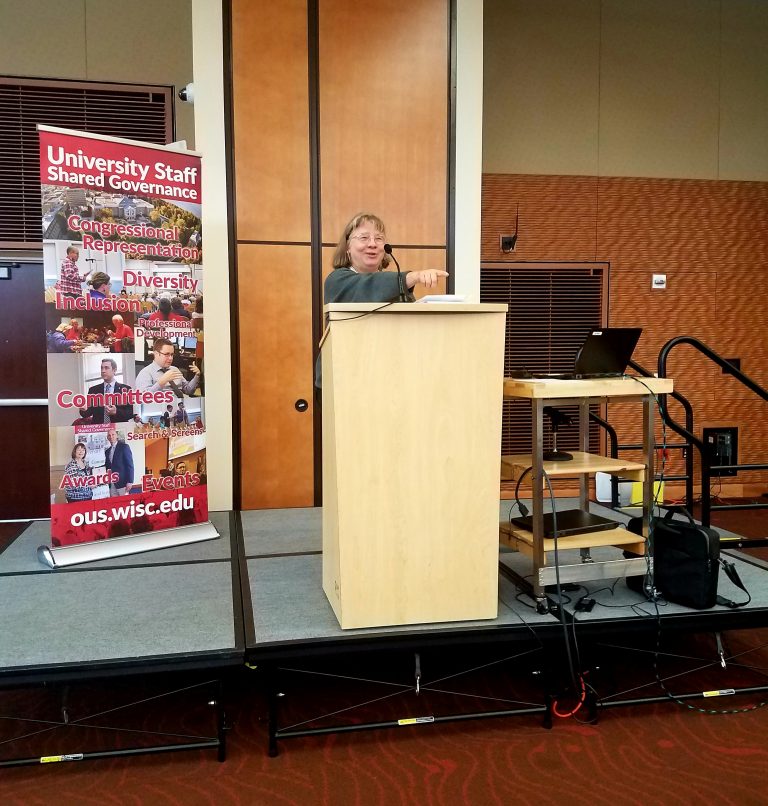 Celebration of Mexican Heritage and Culture

As part of an ongoing series highlighting the culture and heritage of the University Staff, the Office of the Secretary sponsored an evening event on September 18 focused on Mexico, its land, history and people. We were pleased to have a distinguished Keynote Speaker, Dr. Alberto Vargas, provide the remarks for the presentation. His comments were well received by those employees on 2nd and 3rd shift, who packed the Great Hall of Memorial Union in order to hear the presentation.

Please check below more pictures from the celebration. 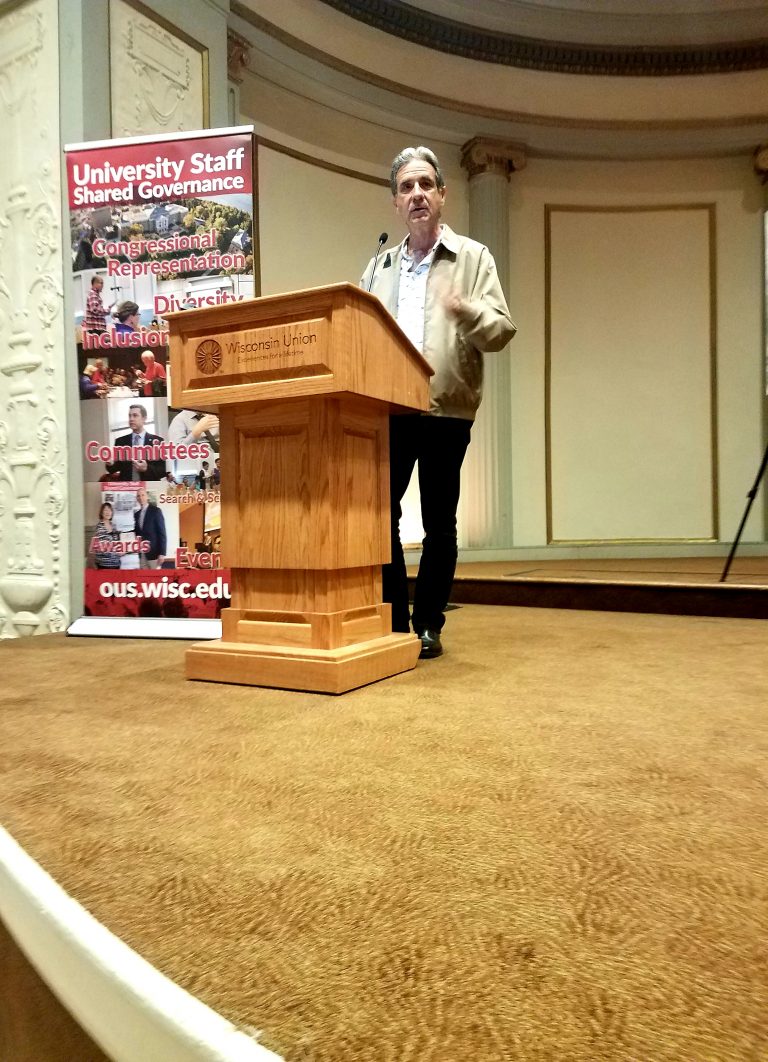 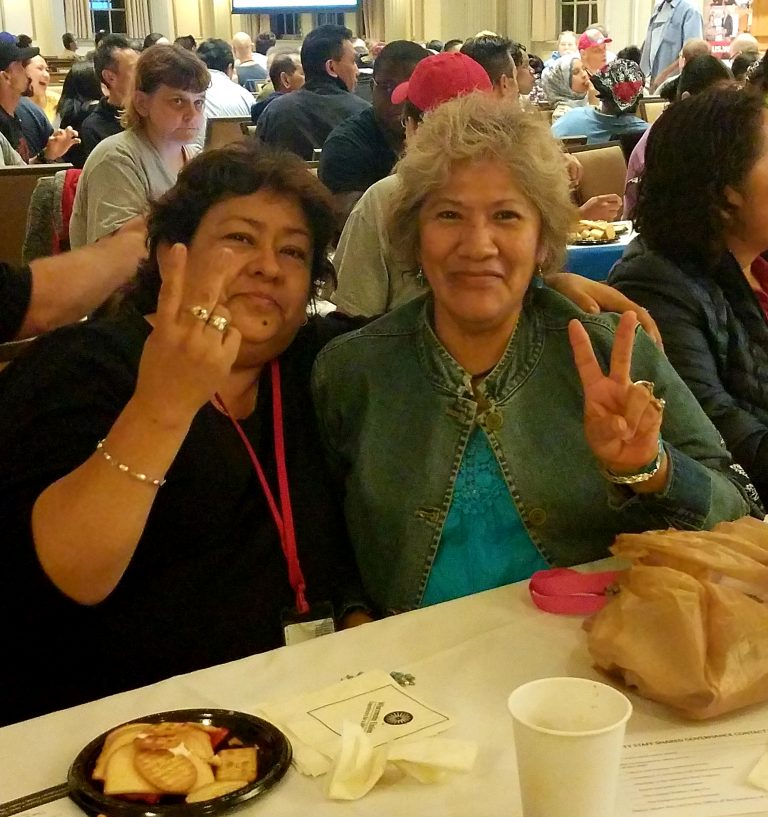 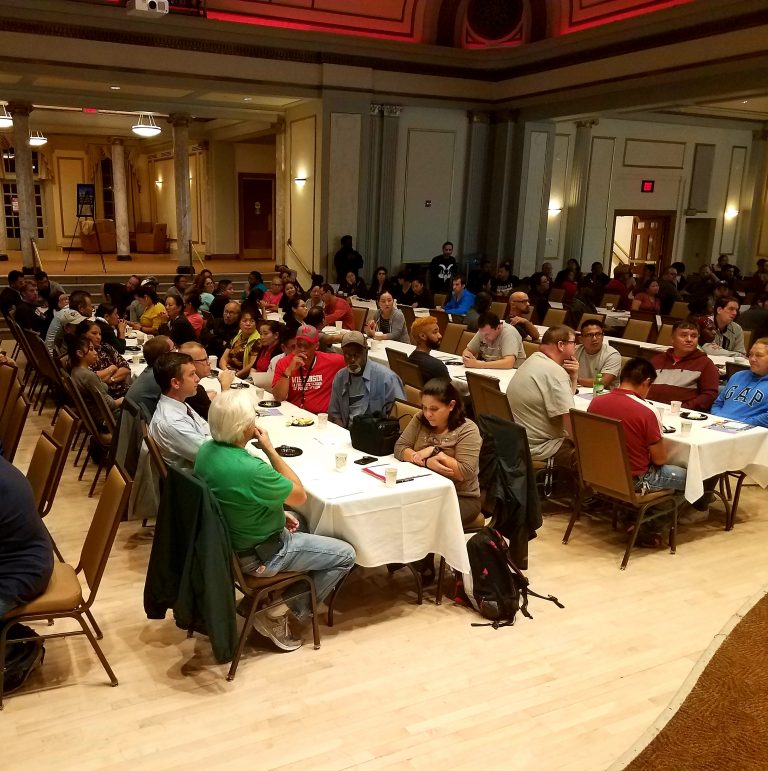